What is couchsurfing: To travel through (a place) or make (one’s way) by staying overnight in other people’s homes (Dictionary.com)

To stay in a strangers home while travelling, in order to save on Hotel costs and learn about the city from locals rather than brochures whose purpose is to drain your bank account. (Me)

So do I look up the phonebook from that city and just start calling people? 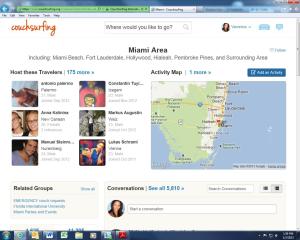 My first time couchsurfing: So I got drunk one December night at my friend Richard’s place. While telling him and his girlfriend about my recent trip to NYC (another blog worthy topic) we decided to look up flights since they didn’t believe how cheap my flights were. In my drunken state I took out my card and bought a flight for me and Richard, completely ignoring his girlfriend Ana and my boyfriend at the time.  An entire semester goes by and I get an email from JetBlue reminding me of my upcoming trip. So here I was a week away from my May NYC trip with less than $300 in my bank account and absolutely no place to stay. Luckily Ana and my boyfriend decided to go as well. And now we were four broke individuals hoping that Ana’s sister would host us. Like Murphy’s law says anything that can go wrong will wrong and so me an Richard landed in NYC (Ruel and Ana were in separate flights later in the day) and wondered Timesquare for hours going from Starbucks to Starbucks for their free Wi-Fi and calling hostels in the area. Every hostel was either ridiculously expensive or seemed extremely shady. I then came across Hotel Carter. They had single occupancy rooms for $60/night and without hesitation we rented a room for the night hoping to figure out where to stay for the rest of the trip. Have you ever stayed at a one-star hotel? I can now say that I have. The corridors smelled of a 1960’s strip club, the room was so small that the furniture took up all the space, the bathroom door didn’t close so we had to smell each others farts, there was a weird faucet in the closet and we had to sneak in the other 2 at night since the room was for two persons. We all cuddled up on one bed and wondered if sleeping on the subway would be better.The next day Ana told us about couchsurfing.org; a website where you can make a profile similar to myspace and send ‘couch requests’ to users who live in the area you are travelling to. Being from Miami, I was completely appalled by her suggestion. Years of living here have taught me to trust no one. After having a long discussion about it, I hesitantly opened up an account and following her advice, made my profile as descriptive as possible.

After doing much research on the site and talking to Ana’s sister who was an avid couchsurfer, I realized that couchsurfing.org went much further than just providing shelter for broke college students that want to travel. It connects locals and creates a community based on the value of reciprocity and adventure. We decided that the best way to find a host was to go to mixer that was happening that night. Within Minutes at the mixer, we found a host for the last 3 nights of our trip. There’s hope for humanity, I thought! That night we slept on the subway after trying to pull an all-nighter by aimlessly roaming from bar to bar. We awoke to the morning commuters staring at us, laughed it off, and then went on our merry way to Harlem where our host lived.

When we arrived we realized that we would be staying with more than just our host. He had a very large apartment with a spare bedroom where 2 German girls were staying; in the living 2 French girls had made a mattress on the floor their home and 2 guys from Switzerland were using one of the 3 sofa-beds. We would occupy the 2 remaining sofa-beds in the living room. Imagine the look on my face. I once lived in a shelter and shared a room with 11 other people and this reminded me way too much of that. This was still better than staying with the nudist that accepted our couch request so I decided that I would make the best of it and began talking to our house mates.

We became friends almost instantly as we wondered about the apartment looking at the his own beautiful photography. Photographers are fun people just trust me on this. The more I learned about their couchsurfing stories, the more I was convinced that I would do this again. It was probably my 8th trip to NYC, but everything felt so new. The parties we went to with our host and the people we met were all the kind of people I want at my “Well-Established” themed 30th birthday.

Since then, I’ve couchsurfed in many other cities and have stayed with wonderful people like Chris Jeon (Google him for one of the most amusing stories you’ll ever hear). I’ve yet to have a bad experience and would recommend to anyone over the age of 18. Even if you’ve got the dolla bills to pay for a hotel, I guarantee couchsurfing will be a phenomenal experience!

PS: Go out and grab life by the balls! 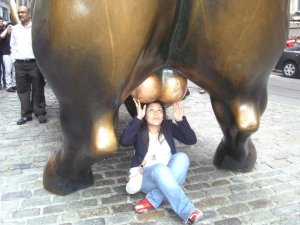 PSS: If you’ve never ordered a large strawberry limonade from McDonalds, poured half into a friends cup and then filled both your cups with Sky Vodka, you are missing out! Its the best way to stay warm in NYC.

4 thoughts on “Couchsurfing.org : Because there is hope for humanity :)”