Sunday morning, for the first time in a really long time, tears of anger ran down my face. As I read my twitter feed for daily news, I realized what I already expected; George Zimmerman who fatally shot Trayvon Martin had been acquitted. And although the racial nature of this case escalated to a civil rights issue it wasn’t even this that made me cry. In fact it wasn’t even the fact that Trayvon Martin was only 17 years old and on the cusp of the rest of his life. 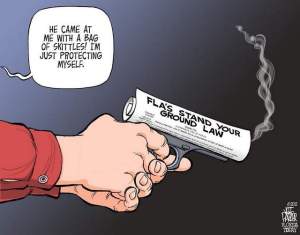 The tears I shed were feelings of despair and helplessness; tears of disappointment and insurmountable anger at our beautiful sunshine state. Florida, the state I’ve grown up in, the state where I built numerous life-long friendships, and more importantly where I wanted to settle in my late age to run a restaurant and adopt 2.5 kids, has become a joke to the rest of the nation. From politicians, to the homeless, and every social group in between, Florida is home to all the scum of the earth. Florida news read like the resulting screenplay if you were to cross Reno 911with Dexter. From face-eating zombies, to doctors running over bikers and fleeing, to a man killing and cooking his mother’s puppy, to a self-appointed neighborhood watchman fatally shooting a teenager with nothing but skittles and an Arizona iced tea in his pockets, to a bill that effectively bans smart phones, this state has regressed into what I must imagine Australia was like when the British decided to dump all their convicts in the late 18th century.

The Trayvon Martin case, however, has brought my disdain for this state to an all-time high. Setting aside the ridiculous laws that have recently passed, setting aside that we continue to elect elitist buffoons into office, setting aside that Pitbull has a key to the City of Miami; I still had some hope for this state. Zimmerman’s acquittal successfully crushed my hope just as I’m sure his burly frame does to his wife if he can get it up without a gun. I live in a state where a murderer can roam free yet a domestic violence victim can’t shoot a warning shot into the ceiling to scare her husband, without getting 20 years in prison.

Although not used as a defense in Zimmerman’s trial, his case brought to light one of those ridiculous laws that Florida so willingly accepts as reasonable. I’ve read the statute (click here for the exact text) and here is what it says in layman’s terms, a person can kill you if they believe you to be of danger to them, even if not in their personal dwelling. This is precisely what George Zimmerman did. Forget that he may be a racist, Forget the possibility that Trayvon was attacking him when he decided to shoot him. Through his own admittance and 911 recordings, we know that Zimmerman followed the teenager and then fatally shot him while allegedly being attacked. Did Zimmerman have any authority to follow him? Had he not followed Trayvon, would he have been attacked by him? Better yet, if a man with a much larger build followed you, would it not be reasonable to feel threatened? Had he instead called the cops to report the “suspicious” activity, could he have avoided the altercation? Did he have to execute a kill shot for this scrawny boy that was beating him up? Could he have shot his leg instead?

See what worries me is not that Zimmerman is free because, knowing this beautiful sunshine state, he is sure to get what he deserves one way or another. What worries me is the precedent that this case and the stand your ground law sets from here on forward. Sure the fact that so much racism still exists makes me cry inside. But the realization that any ordinary civilian can follow me under the pretense that I look suspicious and then shoot me out of fear of what could be in my pockets is unsettling. In fact, the number of “justifiable” homicides in Florida almost tripled in the five years after the law was passed.

Still think this case had nothing to do with you??? If you live in Florida or any of the states with similar laws, we are all Trayvon Martin. The color of your skin, your age, or what hoodie you chose to wear need not matter. We could all fall victim to this law and never see justice for these glorified murderers.

So Florida, it has been good but the minute I can leave this modern day Australia, I will do so. I refuse to let my face be eaten, my puppy be cooked, or be killed for my affinity for skittles and see no justice because of the incompetence of the people that run this state. I also refuse to feel unsafe in the absence of a gun. Good luck with your failure of a war on drugs, homosexuals, and women. I won’t stick around to see what you will live on when Miami sinks and all you have is Disney World.

3 thoughts on “Goodbye Florida: Stand Your Ground & the Precedent Created by the Trayvon Martin Case”